The AWESOME! page has random music stuff that I think is cool. You never know what you will find here!

Remember Jukeboxes? Technically, they are “automated music-playing devices, usually a coin-operated machine, that will play a patron’s selection from self-contained media.” (Thanks Wiki!)

The term “jukebox” originated from the 40s in the U.S., when these “music-playing devices” were often found inside “juke joints,” which were music, dance and drinking establishments – “juke” is thought to be derived from the Gullah language (Gullah’s were African-American people in the Southeast, and the language is similar to Creole) – the Gullah word for rowdy or disorderly is “joog.”

In 1890, the first nickel-in-the-slot phonograph was invented, which used an Edison Class M Electric Phonograph with a device attached that allowed the phonograph to start once a coin was inserted in a slot. The music played through a listening tube. The design evolved to a design where the coin would unlock a mechanism that would allow the listener to turn a crank that would start the phonograph. By 1918, a patent was issued for a machine that would automatically change records, allowing for the listener to choose from multiple songs. In 1928, a machine was available that had a speaker built into a record player allowing the listener to choose up to 8 songs. Continued automation and complexity developed, such that by the 40s, jukeboxes manufactured by companies like Wurlitzer, Seeburg and Rock-Ola were beautiful works of art, with built-in light shows, luxurious wood cabinetry and color animation. Here’s a pic of a 1949 Seeburg Select-o-Matic. Each record had a Letter/Number assigned to it, and the person buying the song would press the buttons on the jukebox that corresponded to the song to be played.

The earliest jukeboxes played music recorded on wax cylinders. Early in the 20th century, they played 78 rpm shellac discs. By the 50s, records were typically produced in 45 rpm vinyl discs, and this enabled jukeboxes to hold up to 100 discs (A & B sides, so 200 songs could be selected). Once CDs became prevalent in the early 80s, jukeboxes evolved to play CDs, which would allow for even larger options for the listener. And today, while you won’t find these classic jukeboxes in public places, you commonly can find ones that are internet-connected that will allow for a nearly unlimited selection of music available to be purchased and played.

TV shows like Happy Days, films like American Graffiti, and musicals like Grease make people link jukeboxes with early rock & roll, but the earlier jukeboxes often featured classical music and opera, swing, bluegrass, honky tonk, big band, jazz and crooners – in other words, whatever music people loved to listen to and were willing to pay for.

I remember growing up and going to diners where each booth or stool by the counter had a wallbox (also known as a dime box or a booth box). These were tied to a main jukebox in the restaurant and served as a remote control, so that you could choose a song without having to get up to see what songs were available on the jukebox. The wallbox had a slot for a coin, and panels that you would flip through to see all of the songs available on the jukebox. This was high tech before there was such a thing as high tech! See below for a picture of what a wallbox would have looked like. 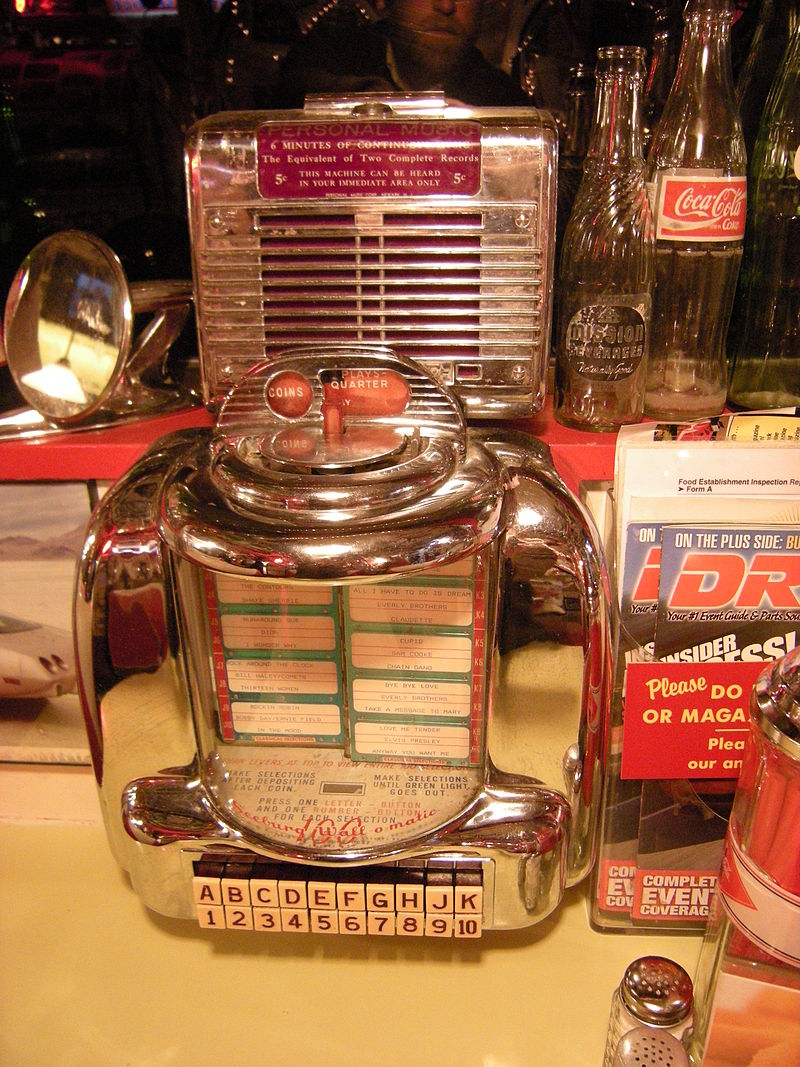 Alas, by the 70s, jukeboxes were losing popularity. Once the portable radio was invented in the 50s, and portable tape players in the 60s (remember 8 Tracks?), it was the beginning of the end. There was a revival when CD jukeboxes became popular in the 80s and 90s, and today, you can find internet based jukeboxes in many bars – Touch Tunes is the largest, with over 65,000 units in operation. You can buy a new jukebox today that is styled like the old classics – Rock-Ola in the U.S. makes machines that play CDs, and Sound Leisure in the UK makes machines that play CDs or vinyl. The Sound Leisure models start at around $8,000 for a CD player, and the vinyl playing models will run you at least $12,000. And of course, you can find old used machines at vintage stores and on the internet.

If you are a fan of classic rock, you certainly know the song Juke Box Hero, from Foreigner’s 1981 album 4. Did you know that there is a stage musical that debuted in Toronto in February 2019 – Jukebox Hero (one word, unlike their hit song) features 20 songs from Foreigner’s song catalog. Here’s Foreigner, performing their hit Juke Box Hero.

1 thought on “The Jukebox”